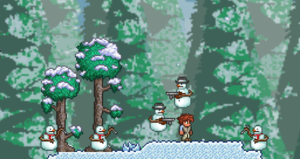 When summoned, a message will appear: The Frost Legion is approaching from the [east/west]!

The direction specified in this message only pertains to the initial wave of Snowmen, which spawns at the World's edge and travels to the player's original spawn point. Additional waves spawn immediately within the player's original spawn area. If the message says "West", the Snowmen will come from the left. If the message says "East", they'll arrive from the right. Note that these directions are not related to the apparent motion of the Sun and the Moon, which, in Terraria, appear to move from left ("West") to right ("East").

When the Frost Legion is about to begin spawning around the player's spawn point, the following message appears: The Frost Legion has arrived! and the theme music will switch to the "Boss 3" theme.